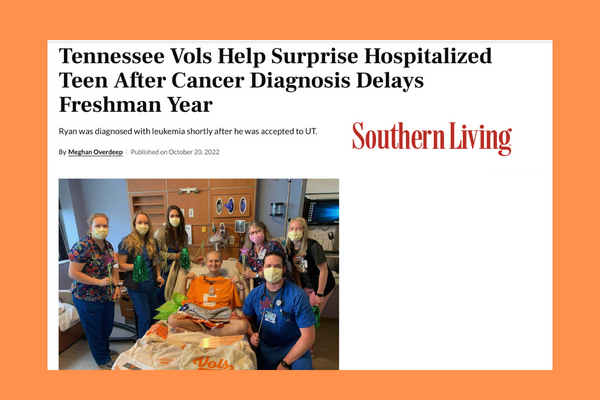 Ryan Beihoffer was accepted to his dream college, the University of Tennessee, and was on track to attend with his girlfriend and best friend when his life took a turn. During his senior year of high school, severe back pain revealed itself as leukemia.

The teen, hospitalized for life-saving treatment, watched from afar as his friends graduated from high school and as college began this fall.

"It's drained his morale quite a bit, initially," Ryan's father Jess told Local 3 News. "Being an 18-year-old kid, being confined to a hospital is probably one of the roughest parts of the treatments, so far."

That's when Little Wishes decided to step in and bring a little bit of college to Ryan. As the non-profit was hunting for Vols swag for Beihoffer, The VolShop, UT's official campus store, decided to pitch in some extra gifts.

« Back to All Articles

Ways You Can Give

Find out how you can make more little wishes come true, and become part of our wish-granting team.
Help Now

Make a donation today to our 501(c)(3) non-profit and watch the joy unfold.
Donate Today

Do you work for an outstanding organization that likes to give back? Learn how your company can partner with Little Wishes to make a big difference.
Become a Partner